Going to do a little cooking on the grill this Memorial Day Weekend? Fairfax County Fire and Rescue would like to remind all residents about grilling safely. Here are some safety tips for a happy and safe cookout experience:

Recipe and instructions are below video.

– Bake French Fries according to package
– Dice full onion (reserve some for cooking with beef, some for topping casserole)
– Chop head of lettuce into shreds
– Cook entirety of ground beef until medium rare (will finish to well done when baking). Drain beef.

– Start your layering process (in order as written):

Using a Turkey Fryer this year to cook your Thanksgiving Dinner? Please make sure you fry the turkey and NOT your home!

If you must fry your turkey, please gobble up these tips from the Consumer Product Safety Commission: 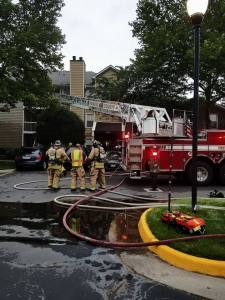 Units arrived on scene to find heavy smoke showing from the hallway of a three-story garden apartment building. Firefighters quickly determined the location of the smoke and entered the apartment to find fire in the kitchen area. The fire was quickly contained and then extinguished. There was no fire extension to any other apartment units.

Two occupants reside in the apartment but were not home at the time of the fire. The fire was reported by the adult occupant when she returned home and discovered smoke upon attempting to enter her apartment. There was one smoke alarm in the apartment and unknown if it activated.

Fire Investigators determined that the fire started in the kitchen of the apartment. The fire is accidental in nature and was caused by an unattended pan of oil left on the heating element of the stove-top.

There were no reported civilian or fire fighter injuries. Red Cross assistance was utilized for one adult and one child displaced by the fire. Damages as a result of the fire were estimated to be approximately $93,750.

Fairfax County Fire and Rescue would also like to remind all residents about cooking safely. Please remember to “Watch What You Heat!

◾Have a “kid-free zone” of at least three feet around the stove and areas where hot food or drink is prepared or carried.

◾Wear short or tight fitting sleeves when cooking. Long loose sleeves are more likely to catch on fire or get caught on pot handles.

◾Keep things that can catch fire such as dish towels, curtains, or paper, at least three feet away from the stove.

◾Do not leave cooking food unattended. If you leave the kitchen, even for a short time, turn off the stove.

◾Regularly clean your cooking equipment so that there are no cooking materials, food items or grease accumulation.

◾Always keep an oven mitt and lid nearby when you are cooking. If a small grease fire starts in a pan, put on an oven mitt and smother the flames by carefully sliding the lid over the pan. Turn off the burner. Do not remove the lid until it is completely cool.

◾If there is an oven fire, turn off the heat and keep the door closed to prevent flames from burning you and your clothing. Have the oven serviced before you use it again. Cooking dinner for that special valentine this evening? Lighting candles to add to the atmosphere? Getting ready to start a fire in the fire place?

If so, take a moment to review some safety tips from our friends at the National Fire Protection Association before you get started. Do not allow your romantic evening to go up in smoke!

When cooking for that special valentine:

Fairfax County Fire and Rescue recommends that you use flameless candles in your home. Many of these candles look and smell like real candles. If you insist on using real candles, please make sure you:

When using the fireplace, please make sure the fireplace has a sturdy screen to stop sparks from flying into the room. Ashes should be cool before putting them in a metal container. Keep the container a safe distance away from your home.

As always, check your smoke alarms to ensure they are working and make sure you know two ways out of your home in case of fire!

Have a Safe and Happy Valentine’s Day!