On Tuesday, March 26 at approximately 4:06 p.m., units responded to a reported house fire in the 12700 block of Bradwell Drive in the Fox Mill area of Fairfax County.

Units arrived on the scene of a two-story, single family home with significant fire visible throughout the attached garage and roof. There was some extension into the attic and first floor areas of the home. Crews quickly brought the fire under control. Three occupants were transported to an area hospital for a check-up. There were no reported firefighter injuries.

Three occupants were home at the time of the fire. A neighbor alerted the occupants of the fire within the attached garage and called 9-1-1. Working smoke alarms were present, however it is unknown if they activated due to the location of the fire.

Fire Investigators determined the fire started in the attached garage. The cause of the fire is under investigation.

Three people were displaced because of the fire. Red Cross assistance was offered and accepted. Damages as a result of the fire were approximately $107,500. 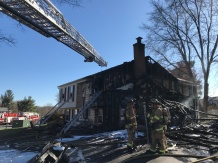 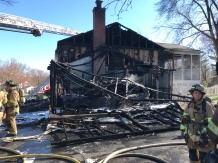