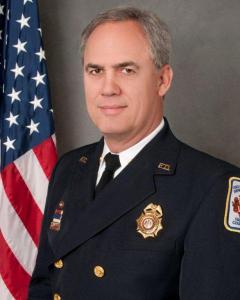 Fairfax County Assistant Fire Chief John Caussin has been named interim chief of the Fire and Rescue Department, effective April 30. Caussin will replace Fire Chief Richard Bowers Jr., who retires at the end of this month.

“We are confident in John’s ability to lead the department and maintain its excellent record of life saving service to the county during this transition,” says County Executive Bryan Hill. “We are making progress in our efforts to identify a new Fire and Rescue Chief, as our focus remains on the future of our great department.”

Fairfax County’s Department of Human Resources has contracted with Polihire to manage the recruitment process for the next fire chief. The position closes at the end of May and it is anticipated that the hiring process will be completed by early summer.

Caussin is a certified paramedic and a sworn assistant fire marshal. He is a member of numerous professional organizations including the International Association of Fire Chiefs, the International Association of Fire Fighters, the Virginia Fire Chiefs Association and the National Fire Protection Association, where he serves on the Technical Committee on Fire and Emergency Service Organization and Deployment. Caussin holds a bachelor’s degree in communications from James Madison University, an associate degree in fire administration from Northern Virginia Community College and is a graduate of the National Fire Academy’s Executive Fire Officer Program.